Oak, squire to the kindly Sir Glyneath, is thrilled when he wins the quintain contest at the cheval tournament. Pleased that he has not let his master down, Oak hopes to bask in the glory for a few days. But the next morning when he awakens to a deserted castle, Oak is left alone, terrified, and wondering where the hundreds of residents have gone without him.

With the castle now empty, Oak decides to venture out into the woods in search of answers. His attempt to solve the mystery is interrupted when he encounters a group of elderly dragons in search of a brave knight to help them on a frightening quest to save the wildwoods and the dragons’ realm. As a knight-in-training, Oak is the closest thing around. After he is recruited to join the quest, Oak soon discovers there is much to learn and endure. Now all he can do is hope he’s equal to he job – and that one day, he will find his way back to his beloved castle and master.

Thadities and the clan is the first book of a trilogy. The fantasy tales are for readers around twelve years of age and upwards.

Amazon, Balboa Press, Barnes and Noble – sites, where the book can be purchased as a hard copy or e-book.

I have quoted a section of my book “Stories to Tell’ about a young boy and his quest for a little ‘Bravodo.’

The lack of empathy between us, is of great concern, to the majority of mankind. If each of us, has the courage to stay strong to who we are and want to become, we may just create a better World. We are not born to hate.

He lived like this for another six months or so and then decided to speak to his teacher. He liked his new teacher.

She did not make fun when he was unable to read aloud in class. She just did not ask, so allowing him to relax and enjoy the lesson.

He loved the stories of brave men and women who cared nothing for their safety or their lives. Until one day, little ones, teacher explained a principal behind one of the stories. The characters were afraid; they just did not show it.

Bravado – was this strength missing from his make up?

Pondering on this defect brought a lot of laughter from him. He could find no defect. He had all his body parts as far as he was aware. Nothing missing. Must have misheard.

So he plucked up his courage and spoke to the teacher.

‘Miss,’ said the boy. ‘Can you see if I am missing Bravado?’ The teacher took her time and gave me a thorough looking over.

‘Turn around,’ she said. ‘Um, no I can see no Bravodo missing. Have you lost it this morning or a few days ago?’ ‘I feel I was never born with any,’ said the boy. ‘Oh everybody has a little Bravodo,’ said the teacher. ‘Do I?’ said the boy. ‘Let me look again.’ Closer and closer she looked behind my ears.

‘Oh, here it is,’ said the teacher. ‘Just tucked in and unable to unfurl itself.’ I could feel it move. Oh the wonder of it. Always there, just not able to show itself.

Next lesson teacher called out my name. ‘Tom, your turn to read now.’

I stood up, no buterflies this time. And, dear little ones, I read. My Bravado was just waiting for the right time to show itself. Today was my right time.

Until next time. Carolyn Evita

Hello! It is time again to write a few words related to a story in my book Stories to Tell.

I was sitting in the garden, the sun was shining and I felt all was well with my world. Do you have a place where you can sit and be quiet? Somewhere where you can go if you are upset or just
need your own space for a little while?
While I am in the garden I like to look at the plants and their flowers, the trees, birds, butterflies and the bees. The animals are always so very busy keeping our world evolving. Each has a different job to do. Do you realise when the bees and butterflies fly around the flowers in our gardens, that they are pollinating them? Without their help we would not be able to sustain our ecosystem. Then they and other animals would go hungry!
If you watch them work, hopefully, you will feel empathy towards them. As you also grow, you can protect them by not using commercial sprays, and looking for alternative methods to get rid of pests.
There are other animals that pollinate. Do you know which ones?
Take the time to look around you and see what you can find around your flowers, plants and trees.
Until next time,
Carolyn Evita
January 11, 2017Leave a comment
January 11, 2017Leave a comment

When we think of Trolls, if we think of them at all, we think big and ugly. But why is this so? Because they are always presented to us this way? In all types of media, the Troll is depicted as the meanest of them all!

Have you asked yourself why?

Because there always must be both a pretty and an ugly presentation. We experience this everywhere, every day. Well, little ones, I think the time has come where we need to make a stand and say: Enough!

Everyone has some beautiful aspect of themselves.

We often hurt the Trolls’ feelings, and anybody else who feels ugly in the same way. We do not live in a perfect world, so we as Homo sapiens should not be expected to be perfect. Neither can we ask the same of the Troll.

It is important we take the time to explore each person’s story, and then look at them in a wiser light. Do you think we could try this; try to not grow up judging each other by our looks? It is up to us to bring out the beauty of the world. 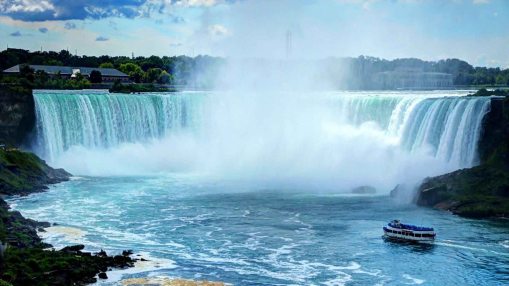 I have been to visit Canada by train, returned to New York for a few days and then flew back to Australia since my last post.

While in Canada I spent some time at Niagara Falls. I have always wanted to see these falls and they were as wonderful as I had hoped.  The water was pristine and there was a rainbow over the falls. It was very bright and clear. While I was looking at the water I thought about all the children in the world who have no access to clean water. There are those of us who waste water and those of us who conserve and treasure our water sources. Who are you going to be? Try your best to be one that conserves water and gives it the respect it deserves. Recycling water for the garden is a good place to start and then as you grow you can think of other methods of conservation.

Also, we need to keep our water clean and free from pollutants. Industrial pollution is the major concern – from animals, chemical processes and plastics.

So, if you want to help, ask if you can re–direct the water from the washing machine onto the garden especially if you live on a septic tank system. Replacing the shower head for a limiting shower-head, rainwater tanks and not washing cars near drains. It is a place to start and hopefully will help you understand the importance of water recycling.

Keeping our water clean is a top priority for our health and well being!

There are many resources available to look for further information about our life giving water.

The Three Sisters are situated at Katoomba New South Wales, Australia. Their Aboriginal names are Meenhi, Wimlah and Gunnedoo.

At the beginning there were words. These words formed stories and I called them Stories to Tell.

From today I will place words on this blog about myself and my travels. On my travels I will gather more material for new stories and this blog. I will also from time to time add photos of Nature. Nature photos make us feel good and it shows us what a beautiful World we live in and why we need to protect Planet Earth.

I believe in a World that is Magical and full of light, sunshine and fun. We will explore this World together and see what we can find. We need to slow down in this crazy World of ours and re connect with Nature and the original World we were born into.

I understand, we cannot go backwards and give up all the necessities of life we feel we need and want. But we can learn to quieten the mind, and learn to live in our fast paced life a little slower. Not get so anxious about ourselves and the life we lead.

So we can go and sit or lie down in the garden, park or a place that we are comfortable in and just look at the sky. Please do not look directly into the sun, or it will hurt your eyes. We are just going to look at the clouds. Can you see any shapes that you recognize, faces or animals? Use your imagination and see what you can find.

I have a story in my book about clouds. It is about a shape. Can you write a few words about clouds or do a drawing of that shape?

Something has been lost since the myth and legend has been hijacked by the mainstream media. The storytellers of old have been replaced by corporations who assimilate everything into fantasy. This could be nothing further from the truth. Through story, most if not all cultures pass on from generation to generation stories pertaining to how we interact with nature and others through the highest of morals and respect. With the vilification of this, it is up to the elders of cultures to make sure these stories infiltrate into the collective heart of our children, guiding them and allowing them to make their way through life with integrity. As we enter the twenty-first century, our children's future is in peril, with an oversexualised media and mass marketing for all the wrong reasons. This book of stories follows the life of a young girl whose imagination is healthy and very active, of her interaction with nature and the nature spirits, to raising children of her own and passing on sacred information to her siblings.
Loading Comments...